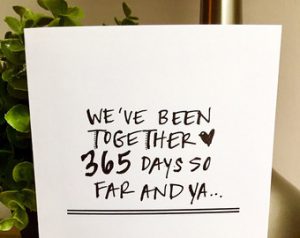 It’s been exactly one year since I arrived in New York, and I was excited to start work and have new adventures. I’d been thinking of moving here since my first visit in November 2014, but had been actively trying since my second visit in June 2015.

I sold and gave away a lot of my things, tried to sell my car (which got written off in the end – KA CHING) and had a lot of final nights out, drinks, dinners, and moments. I can’t believe it’s been a year. In some ways it feels like I’ve been here forever, in others it feels like I’ve just arrived.

When I left, a lot of people told me I’d eventually miss living in Australia and want to come back after a while. This is not the case, and I don’t know if that will ever happen. New York is my home now, and I feel more at home here than I ever did in Grafton (the small town I lived in before Sydney.) I felt at home in Sydney for most of the time I lived there… until I visited New York and realized that’s where I was meant to be.

Apart from the obvious things (friends and family), there’s not that much I miss about Sydney. I’ll start with what I don’t miss:

Australia has a reputation for having sunny, warm weather year ’round. It might not get too cold in the major cities (apart from Hobart and Melbourne) but Sydney weather is not something to wish upon anyone. It rains more often in the warm months than it does in the cold (I took a tally of rainy days in spring and summer and compared it to winter, so if anyone wants to fight me on this, bring it) and this means humidity or as I like to call it, swamp weather.

And if it happens to be sunny and warm without rain approaching, it’s windy. I’ve lost count of the number of times I inadvertently flashed my underwear at passers by on Cleveland Street when I was surprised by a gust of wind, and of the number of umbrellas I’ve thrown on the street when the wind turned them inside out on my way to the train station during a downpour. When I worked at Bondi Beach I would bring my towel and swimmers to go to the beach after work but every day, like clockwork, around 3pm clouds would roll in and it would start raining. Watching the mass exodus of people from the beach was funny until you realized you’d be doing the same trek up Gould Street at the end of your shift.

I’m aware New York summer isn’t much better, but at least that hell only lasts a few months and not 3/4 of the year.

2. Sydney’s (Lack of) Nightlife and Culture
Sydney used to have great nightlife. I used to go out on Oxford Street at least one night every weekend and see bands all the time. The lockouts that came in at the start of 2014 stopped that, and the lack of people supporting live music resulted in many venues shutting down.

Security was tougher, there were more rules to adhere to, and you weren’t trusted to do anything. Sometimes I have flashbacks to that here and assume I’m going to be told no while doing something: taking alcohol into a park to watch the 4th of July fireworks, ordering multiple drinks after a certain time of night, smoking in an outdoor area.

And let’s talk about music festivals. I’ve been to one here that was chilled out and fun, they served a range of drinks instead of just weak beer and premixed sugar water. They weren’t militant about where you could go and what you could do while there. You were trusted to do the right thing because you’re an adult.
The number of music festivals that have been canceled in the last few years is embarrassing. I’m sure it’s a larger Australian problem than one Sydney has caused but still, the ongoing attitude against people having fun would have had an effect somewhere along the line.

3. How Fucking Expensive Everything Is
Food, transport, alcohol, and events are insanely expensive in Sydney. I know New York is considered one of the places with the highest cost of living in the world but even with higher rent, I have more money for fun here than I did in Sydney.

The extra tax and tipping for meals out can add up, but at least you get good service, you can split the bill with others using their cards, and you get about 50% more food than you would for the same meal in Sydney.

What I Do Miss About Sydney:

1. Australian Music.
I fucking miss Australian music. Australian bands have come to play since I’ve lived here – DZ Deathrays, Violent Soho, The Jezabels, Midnight Oil, King Gizzard and the Lizard Wizard – but when I see events like this advertised I know there’s no chance I’ll get to see something like that here.

But I also really miss going out and hearing those huge Australian anthems, played by a live band or just a DJ or jukebox, and feeling connected to everyone around you.

One night I was on a date and walked into a bar in The Village and ‘The Horses’ was playing. The person I was with had no idea what was going on, but I started singing and while I was waiting for a drink someone saw me and said “YOU’RE AUSTRALIAN!”

Another night – on another date – I started talking to a group of people, one of whom was from Melbourne. I checked the jukebox, played ‘The Horses’ and we had a moment.

I took a video of myself singing and the guy I was dating then saw it on instagram the next morning. I played him the real version and then played him ‘You’re the Voice’, and he didn’t understand the brilliance of either. He even mocked the lyrics to ‘You’re the Voice’ by saying not everyone can be someone’s daughter or someone’s son if they’re an orphan. Don’t think those lyrics were meant to be taken literally champ, but thanks for your lame opinion anyway.

I miss having people around me who understand the significance of those unofficial Australian anthems. I know I can always listen to them on Spotify or whatever, but there’s something to be said about the way it feels having everyone around you know and sing along to songs you love when when you unexpectedly hear them out somewhere.

2. Coffee
My God I miss consistently good coffee. There are some great cafes around, but they often make my coffee way too hot. I miss not needing one of those cover things to take my coffee with me, and I miss being able to get a large cappuccino (I know a latte is basically the same thing but this is not the point.)

Also, it’s really expensive here! I’m ashamed at the amount of money I’ve spent to have the luxury of a latte.

3. Palms
I know I had a huge whinge about Sydney’s lack of nightlife above, but that rant excludes Palms. Palms is a gay bar on Oxford Street, that plays old music almost exclusively. You won’t hear Top 40 there (often), the songs that get the biggest reactions are usually from the ’80s and ’90s.

I do have some great dance moves to Rick Astley’s ‘Never Gonna Give You Up’ and Whitney Houston’s ‘Million Dollar Bill.’ And ‘Cry For You.’ All of these include literal interpretations of the lyrics (we put our arms up when Rick Astley sings “Never gonna give you up!” and crouch to the ground when he sings “Never gonna let you down,” and so on) and we look amazing while we do them.

Palms is the only place I’ll suggest going to on Oxford Street, unless the line is too long when we get there and we go to the top level of Stonewall and look out the window to see if the line starts moving quicker. The number of times my friends and I almost got hit by cars rushing across at the Flinders Street lights is actually ridiculous and we should probably be dead by now.

I like Palms so much, that my straight female friend and I went there even when my gay friends weren’t going. We just wanted to dance to Whitney!

Sydney has its shortcomings, like every other city in the world, but I’ll never stop missing Australian music, coffee or Palms. I’m just not in a hurry to go back anytime soon.

I'm an Australian living in New York. I work in marketing but I write about music, New York, and my own personal experiences. View all posts by Justine McNamara

This site uses Akismet to reduce spam. Learn how your comment data is processed.